What do you think of the proposal for a parking permit program on in the Carterville Neighborhood?

Should a new parking permit program be implemented in the Carterville Neighborhood on 300 West, 380 West, 1625 North, 1500 North, and 1300 North? The proposed parking permit program expansion aims to preserve on-street parking in the area of the Carterville Neighborhood mentioned above for the residents of that neighborhood and their guests. Residents have seen people living in nearby apartment buildings park their cars on these streets and leave them for multiple days. This program aims to limit that from happening. Carterville resident Mary Gale has requested that a new Residential Parking Permit Program be created in the Carterville Neighborhood on 300 West from Cougar Boulevard to 1625 North, 380 West from 1300 North to 1500 North, 1300 North from 300 West to 380 West, 1500 North from 380 West to 300 West, and 1625 North from 300 West to Freedom Boulevard. On October 9, 2019, Provo City Council directed the Community and Neighborhood Services Department to study this proposal and recommend action. 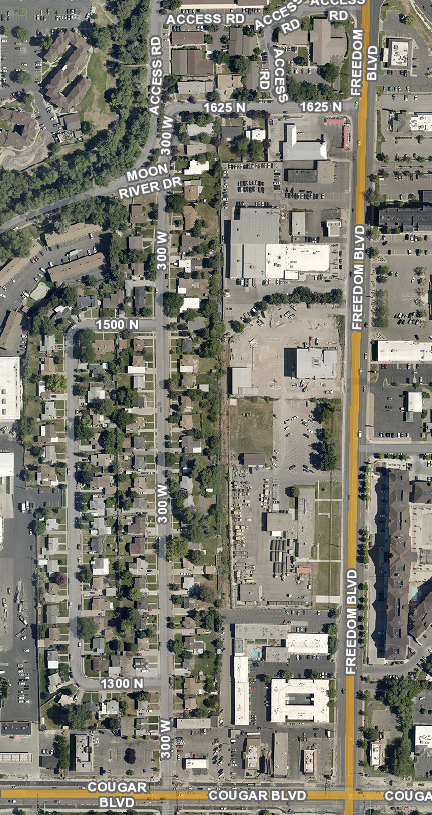 Ms. Gale proposes a flexible cost that helps Provo City pay for the cost of enforcement, suggested between $50 and $100 per permit per year, determined by The City. The permit would include eighteen (18) one-day visitor passes and one (1) seven-day visitor pass.

All residents whose homes front the streets in the proposed parking permit area would be eligible to purchase a permit; no more than two parking permits per housing unit.

As per Provo City Code 9.80.150, parking permits are nontransferable.

The proposed area is a good fit geographically for a permit program because the busy arterial roads that border it would prevent any potential spillover parking.

The proposed hourly restrictions are similar to other existing permit areas and work well because it allows for daytime visitor parking while ensuring that those who live outside the neighborhood are not storing their cars inside it long-term. It accomplishes the goals of this residential parking permit program—to preserve on-street parking for the residents of the area.

Staff believes the proposed limit of two per housing unit is a good limit for the time being; however Provo City would run the risk of overselling because most of the homes have around two parking spaces of frontage but an accessory apartment, making them eligible for up to four permits. If a permit program is implemented and oversold, Council could amend the code later to limit the number to one permit per unit.

Does the Proposed Program Address the Stated Goals?

Ms. Gale is correct that expanding this permit area would preserve on-street parking for only the residents living on those streets as it would ban overnight parking without a permit, which would only be available to residents of that neighborhood.

While the proposal would stop car owners living outside the permit area from parking overnight and over multiple days on these streets, staff does not believe there is a need to restrict public overnight parking here. As we counted parking over multiple days, we found that high rates of overnight and multi-day on-street parking is primarily happening in only two small areas of the area in question and not an issue for much of the area in the proposed permit area.

This data shows that the large majority of the proposed permit area has more than enough off-street parking to meet existing demand.

We also surveyed parking lots around office, hotel, retail, and restaurant buildings to the north and east of the proposed permit area. More than 90% of those few hundred parking spaces sit empty at night—a time of peak demand for student parking. There is significant potential for shared parking between these student housing complexes and neighboring businesses. Though currently not allowed under Provo City Code 14.37.080 (1) (a), it is an efficient use of space as existing parking spaces get more use and prevent the need to build more. Shared parking on separate parcels is currently allowed for commercial properties but not residential.
To make this possible, Council would first need to amend code 14.37.080 (1) (a) to make shared parking possible for residential properties. That would allow property managers to work out shared parking agreements amongst themselves and maximize use of existing parking assets. Staff supports this action.

Is the Permit Program Necessary?

Staff believes the new permit program is unnecessary for the following reasons:

Provo City Community and Neighborhood Services recommends that the Council not accept the proposal to create a new residential parking permit area in the Carterville Neighborhood. Instead, we recommend that the Parking Enforcement Division continue enforcing the 72-hour time limit on 1625 North to ensure that people parking here are obeying current parking regulations. We will also continue to observe the changes in parking on 1625 North to evaluate the effects of removing parking limits on Paul Ream Avenue.

This will accomplish the goal of ensuring that people living in this area still have the ability to find a parking space on the street parking without using the heavy-handed approach of banning overnight public parking over a large area. A focus on enforcing the 72-hour time limit will create enough parking turnover that on-street parking utilization should decrease on 1625 North.

Staff appreciates the efforts of Mary Gale and her neighbors to make their neighborhood a better place to live. However, we see a new residential parking permit program as an unnecessarily strict regulation.

We recommend that Provo City Council not adopt the proposal to create the Carterville Neighborhood Parking Permit Area and, instead, that we continue enforcing the 72-hour limit on 1625 North. Staff will continue to monitor and evaluate on-street parking concerns in the neighborhood and report any additional recommendations to the Council.

Entire report can be downloaded here.

This topic has 96 visitors and 14 statements.