City of Asheville Parks & Recreation Department is in the final stages of designing proposed improvements to Mountainside Park and Memorial Stadium bond project.

On July 24, 2018, City Council approved a contract with Alfred Benesch & Company to provide design services for Mountainside Park/Memorial Stadium upgrades and renovations. The next steps will include survey and geotechnical testing to take place in August and September. 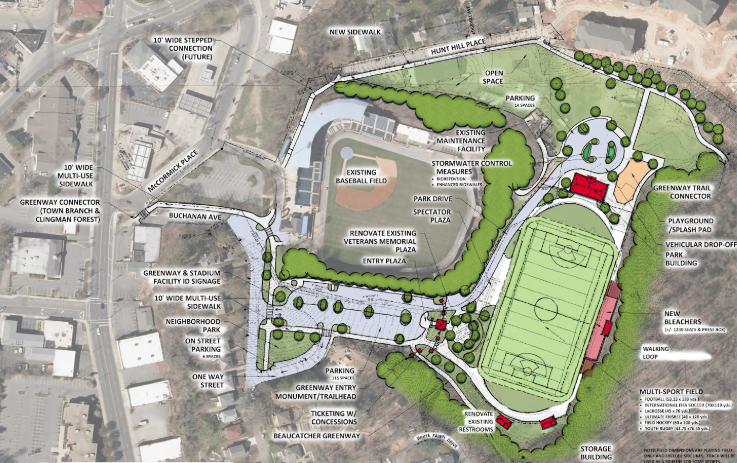 Please scroll down to take the survey and share your feedback.

Thank you for your participation!

Memorial Stadium was purchased in 1925 and dedicated on Oct. 7, 1927. Originally, the stadium’s entrance was intended to serve as a memorial to Western North Carolina veterans lost in World War II. The brick archway was later constructed in honor of the veterans and the stadium was re-dedicated in 1949. The grandstands were demolished in 1982 due to structural concerns. The bleachers currently at the stadium were once part of the former Asheville Speedway, where Carrier Park now sits.

In 2016, Asheville residents voted yes to use municipal bonds to generate revenue for community investments across the City. General obligation bonds are considered one of the safest municipal funding tools available. The City has seven years to issue the bonds and approximately 20 years to pay off the bonds after the funds are received. Find more information at this link.