Gear up for game day with Sunnyvale's Climate Action Playbook!

The City of Sunnyvale is seeking your input on the new Draft Climate Action Playbook. 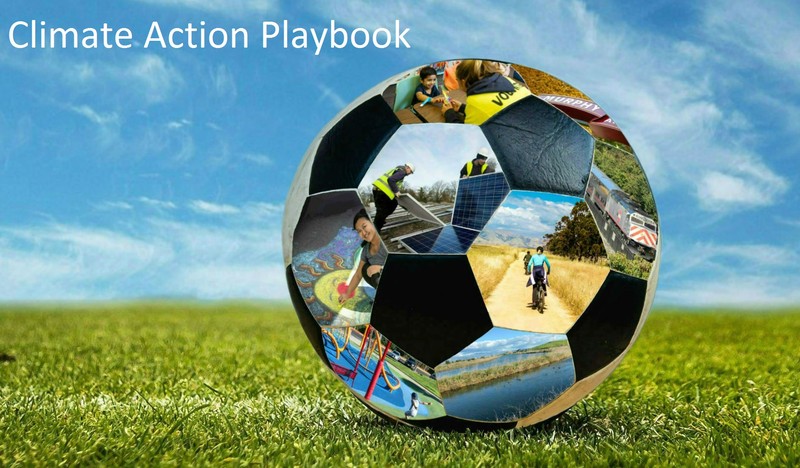 The Draft Climate Action Playbook ("Playbook") is a plan to reduce greenhouse gas emissions, which contribute to climate change. This Draft Playbook builds upon the success of the City's first Climate Action Plan and integrates new ideas generated by and for our community over the last year. It outlines a pathway to help Sunnyvale achieve the state's long-term target of an 80% reduction in greenhouse gas emissions by the year 2050.

Browse our Game Plan of Moves for the next three years.

To ensure that our final Playbook includes climate actions that have the broadest community support, we invite you to share your input online through this form.

We also invite you to attend any of our upcoming public meetings.

The Sunnyvale Draft Climate Action Playbook (“Playbook”) outlines the policy and program direction needed to continue to dramatically reduce our greenhouse gas emissions and decarbonize our local community. The City’s first Climate Action Plan (adopted 2014) was designed to help the City re-establish its emissions levels as equal to 1990 levels by 2020. By 2016, the City had already surpassed this 2020 target.

Now the State of California has set new targets that move the ball further down the field for even deeper emissions reductions of:

Sunnyvale City Council identified “Accelerating Climate Action” as a Council Policy Priority in 2017 to enable the City to meet or exceed these state targets.

From this, we now have Sunnyvale’s new Draft Climate Action Playbook. The Draft Playbook builds upon our past success and integrates new ideas generated by and for our community that will pave the path toward our “end game” of 80x50. Early action is critical to setting Sunnyvale on a path to achieving 80x50, given the projected growth in population and jobs. For this reason, it is important that Sunnyvale achieve a 60% reduction below 1990 emissions levels by 2030 – surpassing the State's goal of achieving a 40% reduction by 2030.

Inside our Draft Playbook

Within each Strategy, the Draft Playbook defines:

The Draft Playbook's Game Plan is a compilation of Moves to focus on through 2022. This Game Plan will be updated every five years hereafter as new technologies emerge and new state or local regulations go into effect.

While it is impossible to envision all the right Moves today, the Draft Playbook clearly defines the end game, identifies key players, and sets the ball rolling towards the goal posts.

This topic has 430 visitors and 65 responses.