Get announcements of new topics and important updates to existing topics from the City of Gainesville in your RSS reader or emailed to you as a daily digest.

Statements are emailed at most once per day (in the morning).

Manage your subscription in your RSS feed reader

Check out some recent announcements 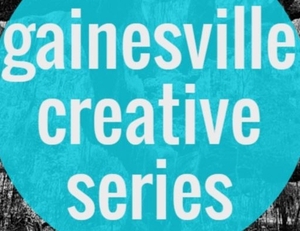 What are your big ideas to improve the Gainesville community?

In early 2016, we launched the Gainesville Creative Series, striving to redesign the way in which we develop and implement the city's strategic plan, the leading guide of our organization.

Share with us your big ideas of how the city can better impact the Gainesville community! 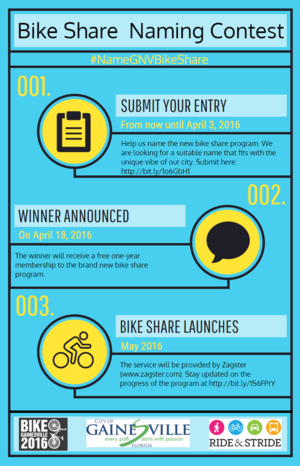 Help the City of Gainesville design a budget for you!

The City Commission adopts a budget each year that reflects the goals and priorities for Gainesville. This year as the Commission prepares for workshops in April and May, we would like to hear from the most valuable users of the city’s budget, Gainesville citizens. This survey asks questions related to general government, which does not include utility services.

Help the City of Gainesville design a budget for you!

Contribute your priorities by April 25th!

The City of Gainesville has recently completed a landscaping project along the West 6th Street Rails-to-Trails between NW 4th Street and NW 16th Avenue. There is an open public space located just south of NW 10th Avenue as shown in the picture available online.

What type of site furnishings would you recommend to best support the trail (benches, picnic tables, etc.)?

Contribute your ideas by July 31st!

How can the City of Gainesville effectively meet the citizens' needs through its hours and methods of availability?

Should small skateparks be built along City trails?

Thank you very much for participating in the NE 8th Avenue Crosswalk forum.  Option 2B, the mid-block crosswalk, was preferred by 65% of those who participated in this forum. This option will move forward in the design process. Construction is slated for the summer of 2015 and is anticipated to last less than 30 days. Please contact Betsy Waite, Project Manager, at the contact information listed below if you have any questions or comments regarding this project. For additional information and project updates please click on read more    Respectfully,   Betsy Waite, P.E. City of Gainesville Public Works Office: (352)-393-8405 waiteed@cityofgainesville.org

Where should the City of Gainesville build a signalized crosswalk to assist pedestrians with crossing NE 8th Avenue in the Duck Pond area?

Thank you for your input on the proposed installation of skateboard facilities adjacent to the West 6th Street Rails-to-Trails near NW 7th Avenue. Based on the input received from the citizens, City Staff has recommended to the City Commission that these facilities NOT be installed in this location.

In general, the feedback provided at the public meeting was opposed to the concept at this location and mixed regarding the concept at other locations perhaps further south. Online feedback has been mostly positive regarding the installation of these facilities near the bicycle trail. After reviewing all the comments received from both forums, City Staff is recommending other locations be analyzed for suitability based on right-of-way width, proximity to the trail, and existing lighting. Once the additional potential locations have been identified and analyzed, another public meeting will be held with invitations being sent to nearby property owners as well as all attendees of the previous public meeting.

Thank you again for you involvement in this project. Please feel free to forward this message to anyone you think may be interested and let me know if you have any further comments or questions.

Are we on track with our proposed South Main Street Planning Process Statement and 5 Guiding Planning Principles?

Should small skateparks be built along City trails?

What improvements to South Main Street could be done to improve the area around Depot Park?

The City of Gainesville has recently opened two forums related to walking and bicycling in which your participation is requested! The City’s Bicycle and Pedestrian Program – Ride & Stride – would like to hear from citizens what they can do to encourage you to walk and bike. They are also soliciting input on areas of the City that could benefit from additional bicycle parking installation.

You can learn more about Ride & Stride at www.cityofgainesville.com/bikeped. We look forward to hearing from you. Please share this invitation with others in the community who may wish to participate.  The forums close on November 27th.

The City Commission reviewed staff's presentation along with engageGNV feedback at the City Commisstion meeting on August 21, 2014. City Commission approved staff's recommendation for option #4, which was also the option that received the most endorsement on this forum. If you would like to get more information on this project, please go to the project webpage. You can also sign up for this project's electronic newsletter on this webpage as well.